Kandy, Sri Lanka, has a lot to offer

Kandy, Sri Lanka’s second-largest city, is surrounded by mountains and tea plantations. Kandy is a popular destination for visitors who wish to spend a day or two viewing its colonial structures and religious monuments due to its 3-hour distance from the capital, Colombo. While Kandy city is included in most guidebooks as the primary attraction, there are more impressive things to view in the rainforest area outside of the city.

Sri Lanka is known for its beautiful beaches, religious monuments, and thrilling train journeys, among other things. This is where Kandy comes into play on your Sri Lanka Route, as the starting point for one of the world’s most spectacular rail rides and home to a plethora of cultural attractions. 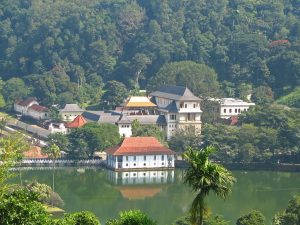 Kandy’s Botanical Garden is a must-see for anybody visiting the city.

The Kandy Royal Botanical Gardens attract visitors of all ages, particularly on weekends. The garden’s myriad (4000+) plant and tree species have made it famous. It’s a 15-minute drive west of Kandy and a nice place to get away from it all. Wander through the expansive garden, sit in the grass with a towel, or get a drink at one of the restaurants.

Old colonial structures and street merchants line the streets of Kandy’s downtown area. Begin your journey at the Temple of the Tooth and stroll through the ancient streets, stopping to sample a fresh coconut from one of the many brightly colored fruit booths. Remember to gaze up to see the old structures’ splendor.

Sigiriya, about three hours from Kandy, is a lovely region. Lion Rock, a UNESCO world heritage site and a must-see in Sri Lanka, is located here. Lion Rock, a 200-meter-square-shaped rock that towers over the whole region, is the largest in the area.

Hiking to the summit at sunrise is one of the greatest ways to appreciate this natural phenomenon. As a result, staying the night before in Sigiriya or Habarana is highly suggested. 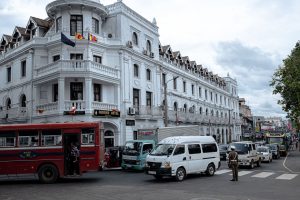 Sri Dalada Maligawa, popularly known as the Temple of the Tooth, is a stunning golden-roofed Buddhist temple in the center of Kandy.

The temple is a must-see in Kandy, not only because of its religious significance as one of Buddhism’s most important shrines, but also because of its stunning inside.

The Kandy Buddha Statue is located in the highlands

The largest Buddha statue in Sri Lanka is the Bahiravokanda Vihara Buddha Statue. In the shadow of the Knuckles Mountain range, this 88-foot-high monument is hidden among the hilltops above Kandy. A short trek up the steps will reward you with a panoramic view of the city. 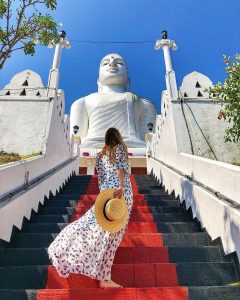 Take a stroll around the tranquil Kandy Lake, which is considered the city’s heart and soul due to its central position and unmistakable beauty. A little island with a few palm palms in the center of the lake is known as one of Kandy’s famous vistas and has been featured on numerous postcards.

Train from Kandy to Ella

Kandy is the beginning point for one of the world’s most beautiful rail lines, a breathtaking 4–7-hour ride through the tea plantation highlands that is a must-do on any Sri Lanka vacation itinerary. As you dangle your feet outside the open train’s door, feel the wind blow through your hair and across your skin—an amazing sensation that allows you to observe nature in a completely new light.

Nuwara Eliya, Sri lanka
Things You Must Do in Mirissa Sri Lanka 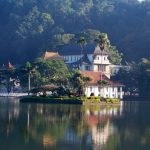