Things You Must Do in Mirissa Sri Lanka

Mirissa is one of Sri Lanka’s most popular beach resorts, and with good reason! Beautiful Sri Lankan beaches, amazing surfing waves, and waterways abounding with marine life, from turtles to enormous blue whales, are all found in this area. Spend your days relaxing in your hammock, eating excellent meals at coastal eateries, and riding your motorcycle about. Four days is the ideal length of time to soak in the laid-back lifestyle of this sunny beach town while taking in all of Mirissa’s major attractions. 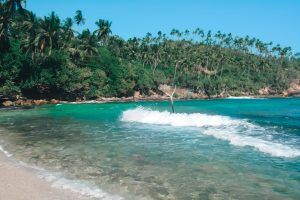 Although Secret Beach is no longer a secret, it still has the sense of a secluded island paradise! The little, isolated beach is situated around the corner from Mirissa’s main beach and is slightly more difficult to find. As a result, fewer people visit the beach, and if you arrive early enough, you may have the entire beach to yourself!

On this headland, there are three gorgeous beaches to select from, each with its own distinct features such as rockpools and coconut palm palms. Spend the day relaxing in the clear blue sea, snorkeling among the diverse marine life and keeping a look out for turtles, and savoring every second of this slice of paradise. There is no charge to access the beaches, but please help the local economy by purchasing food, beverages, sunbeds, or snorkels from the residents that work here.

Parrot Rock, a massive red-colored hill that looms above the ocean, stands just in front of Mirissa Beach. It’s quickly become one of the most popular things to do in Mirissa, thanks to the stunning views of the palm-lined beaches below.

Because Parrot Rock is located at sea, you’ll need to check the tides before crossing, as low tide is the safest time to cross but you won’t get wet. Crossing at high tide, especially during the monsoon season when the waves are very powerful, might be risky.

Climb the crumbling stairs to the summit after you’ve reached the rock. Beautiful views of Mirissa may be seen from here. It’s very popular during sunset, although it may get rather crowded. As a result, we advocate waking up early and ascending before sunrise. The gorgeous early morning pinks and oranges of the Mirissa skyline may be seen at this time, as well as the light filtering through the green palm palms.

Top Things to Do on Coconut Tree Hill Mirissa

Coconut Tree Hill is one of Sri Lanka’s most social media trending locations, as well as one of the most popular things to do in Mirissa. Only a 15-minute walk from Mirissa Beach, the private coconut plantation offers some of the greatest views in the area! 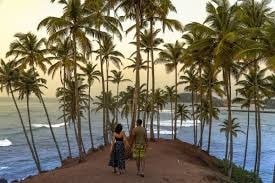 Weligama is a little coastal town recognized across the world as the surfing capital. Surfers from all over the globe come here to experience the incredible waves and stunning white sand beaches. As a result, the tourist infrastructure is fantastic, with a plethora of hip pubs, cafés, restaurants, and beach resorts.

Book a surf lesson at one of the many surf schools that line the beach in Weligama for the day. Eat some excellent and healthful cuisine or attend a local culinary lesson after your water experience.

Mirissa features some of Sri Lanka’s greatest marine life. It’s known for its whale population, which may be viewed from late November to early March. Whales travel south during this time. A guide will take you out into the deep blue Indian Ocean to witness whales, dolphins, and turtles on a whale watching excursion, many of which may be seen on the beach. If you’re lucky, you could even see a gigantic blue whale, the world’s biggest mammal!

A day trip to Unawatuna and the Galle Fort

Unawatuna is a prominent tourist destination on Sri Lanka’s south coast. It’s known for its pristine beaches, trendy eateries, and vibrant nightlife. It’s the ideal destination to visit for a day vacation because it’s only a 50-minute journey from Mirissa.

To spend the morning at Unawatuna, rent a motorcycle and drive around the shore. Swimming at the beaches, swinging on the famed Dalawella beach swing, or taking photographs of the ocean vistas from the Japanese Peace Pagoda are all options. It’s also a good area to rent a board and learn to surf because of the beginner-friendly waves.

Sri Lanka is well-known for its surfing, and Mirissa Beach is no exception. It’s famous for its waves, which appeal to both beginners and intermediates. Beginners will like the gentle waves off the main beach, while intermediates will seek out one of the reefs breaks off the headland.

Surfing is one of the best activities to do in Mirissa during the correct season (October to March). Plus, when all that energy is used surfing, you’ll be able to indulge in some delectable cuisine at one of the numerous seaside restaurants and cafes. 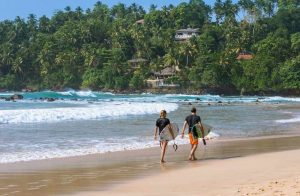 In Matara, you may get a taste of actual Sri Lankan life. There is relatively little tourism in the busy commercial town because it is not renowned as a holiday resort. As a result, the town is a stunning depiction of Sri Lankan culture. Wander the streets like the residents do, relaxing on the calm, sandy beach or participating in sports inside Matara Fort. To get to Matara, take a motorbike or tuk-tuk east from Mirissa along the coast. It takes 30 minutes to get there. 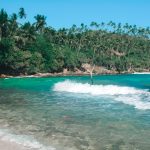